Personally, one of the things I’ve been looking forward to is seeing Margaret Horley, who I haven’t seen since 1975, the year Alison’s father died, and we were in the UK as an extension to a business trip with Scott Paper Company. Margaret was married to Barney Horley, a cousin of Marion, Alison and Trevor, and has two children, Simon and Lucy. Alison and Marion had visited Margaret and Barney in May, 2013. Sadly, Barney passed away in June of cancer – very quickly, although he had been sick for at least a year. Alison and Marion were very fortunate to have seen Barney one last time, and Margaret told us that it meant a great deal to him to have seen them.

Marion called as soon as we arrived in London and we schedule a lunch for Monday, September 30th. Our objective was to travel the 25 miles due west first via tube and then transfer to the train. No problem. The total trip was about an hour and a half, and Margaret picked us up at the station in her Volvo, and we drove approximately 10 minutes to her house, through lovely surroundings.

She has been in the house for more than 30 years, and Lucy lives a short walking distance from Margaret. Both Lucy and Simon were working on Monday, so we didn’t have an opportunity to see them.

Margaret prepared a wonderful lunch for us. One of her 4-legged charges, a Shitsu named Tia was very cute and playful. Margaret has up to 8 or so dogs that she keeps an eye on from time-to-time. After the main course, we went for a nice walk along a much milder and tame Thames River – although explain tame to those whose houses were flooded not long ago!

We returned to the house and had tea and delicious Welsh cakes, and we talked about family history and genealogy for some time. Fascinating – and I actually knew some of the people they were talking about. “Lunch” lasted a long time and we caught the 7:32pm train back to Central London. Long day – good time. 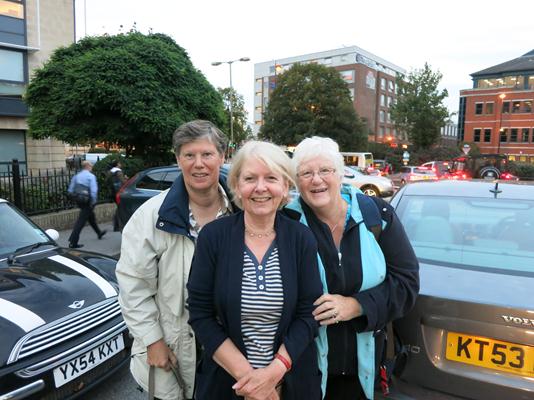