On our list of things to do while in London was to attend the Fawlty Towers dinner theater. Marion and Alison had attended the luncheon version in May, 2013, and loved it. Barry and I wanted to give it a go, too. I had the least exposure to this benchmark BBC comedy series, which made only 12 episodes – six episodes each in 1975 and 1979, so…. Alison and I watched almost all of them on Netflix, so I/we would be prepared. The famous John Cleese starred as Basil Fawlty, who along with wife, Sybil, owned a fictional hotel known as Fawlty Towers. Hilarious – more later. But, that wasn’t until 6pm

What to do with the rest of the day. Well, we relaxed, first thing in the day, then decided to do the bus tour / hop on – hop off, of London. In the melee around the popular bus tour corners, we inadvertently purchased tickets on The Original Tour, which included a boat tour on the Thames. We sat on the open-air top deck with our tourist headphones, and even with our jackets on, it was a bit cool in the morning. The bus wound through the popular sites of Central London, and we sat on the bus all the way to the exit for the Thames River Cruise, which was down by Big Ben.

The cruise ended down by Big Ben, which began to strike 12 just as we arrived on the boat – very impressive. The “Thames Seaman”, a rather young gentleman earned a handsome tip with his “narrative” of the banks of the Thames. We did have some excitement near Big Ben. We noticed a large amount of emergency activity in the air (two helicopters), on land (screaming ambulances and rescue vehicles), and on the Thames itself with Police and rescue boats screaming down river with lights and sirens blaring. We didn’t find out until later that a duck boat (used for tourism, just like they are on the Delaware River) caught fire and several passengers, we heard 23, ended up in the water, which runs 5 knots in that area – very fast, if you are a person bobbing in the water. Fortunately, there were no fatalities that we heard of.

We walked around the area of Westminster Abbey and Big Ben, wallowing in the history, and tried to find a good spot to eat. Busy, busy, busy. We did hit the toilets, but decided to eat when we got back to the flat. So, we crossed the bridge, with eastern block shell game players all along the sidewalk, to catch the bus route on the other side, and wound our way back to our neighborhood, where we stopped at John Lewis for a few items and walked home. Overall, it was a good touring day — minus formal church and museum tours.

As it turned out, we didn’t have to dress for the Fawltey Towers dinner theater, but we did to a degree. We walked back to our familiar Oxford Circus tube stop and took the tube to the Charing Cross stop, popped up and walked the short distance to the Charing 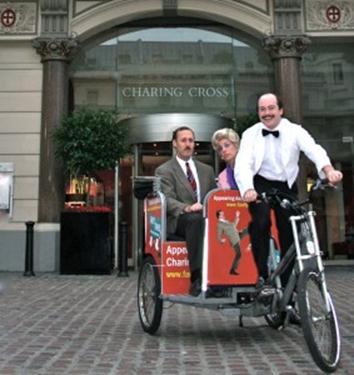 Cross Hotel – the site of the event. I think we were a bit early and the first to check in. We bought a bottle of wine and stood in the bar as others gathered. At almost 6:30, the characters, Basil, Sybil, and Manuel started wandering in, in character, and interacting with the guests. From that point, it was almost non-stop laughter for over 2 hours.

Basil and Sybil Fawlty, and Manuel 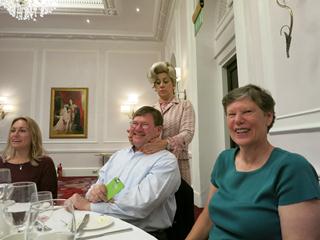 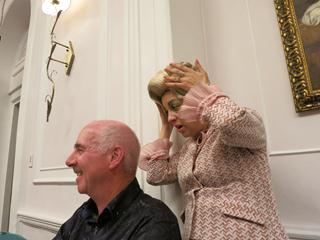 But, that wasn’t the only show in town. The NFL’s Pittsburgh Steelers and the Minnesota Vikings played a game in London that also started at 6pm. Supposedly, there were more than 10,000 fans from the US and 70,000 or so locals in attendance. The US fans were certainly in abundance over the weekend – many wearing their football jerseys. 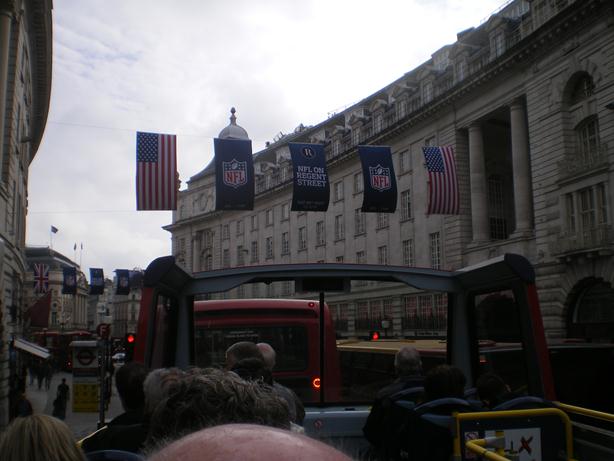 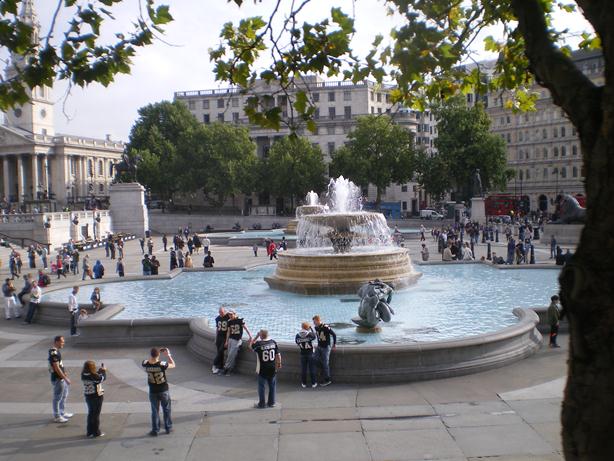