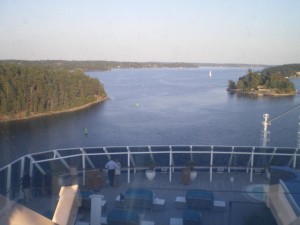 Per Wikipedia, an archipelago, sometimes called an island group or island chain, is a chain, cluster or collection of islands. List of archipelagos by number of islands, islets, reefs, coral reefs and cays:

We woke up to a beautiful morning in Stockholm, after the fog burned off – the high temperature was to be somewhere around 70. Warm for this time of year in Stockholm. The breakfast buffet was excellent, followed by re-packing, checking out and joining a small band of Canadians for our three-hour “Tour of 8” sweep of Stockholm, starting at 9. Brigitte was our guide and George, our driver.

Highlights of the bus tour included an architectural lesson – including “functionalism”, art Nuevo, and “dismalism”, as our guide put it. The country was one of Europe’s poorest until the 1960’s. As the economy grew, so did the need for more / affordable housing, They built boxes that people lived in – lots of straight lines and plainness. Social Democracy, which included some German and Russian historical influence, put the government in the forefront of many of these social / capatilistic programs. Income Tax? About 60%.

For you government healthcare enthusiasts, Sweden has provided healthcare for its citizens for years, and still does. However, we learned that many have started to purchase their own insurance policies to, at a minimum, supplement the government programs to get around the long queues and delays in getting services – or obtaining the services you want.

“City Hall” in Stockholm isn’t historically “old”, having opened in 1923, but it is important, as it is the site of celebration of the Nobel Prize. Nobel, inventor of dynamite, became the world’s richest man (so we were told), but it sounded like he was somewhat incomplete socially and relationship-wise. He dictated the Nobel minute details surrounding the prize categories and the celebration of such in great detail. Some portions of City Hall were quite beautiful – personally, I liked the interior courtyard, but others, like the “Gold Room”, in my mind, were very odd. It is essentially political art, and very abstract.

The Vasa Museum is one of THE highlights of visiting Stockholm. The Swedish king had made a decision that he quickly needed to build a large and formidable new warship, and commissioned a master shipbuilder from [Norway or Finland] and master carvers from Germany. They were to build the ship in 2-1/2 years, which was almost insane, but they did it – including some significant last-minute design changes requested by the King. On its maiden voyage, the Vasa capsized and sunk about a half mile from the pier in 1628. The ship was raised in the 1950’s and was floated to what is now the museum. The preservation of the original ship and contents I s incredible. It is a very interesting story and piece of history.

The tour ended with our arrival at the port, and check-in for the Oceana Marina. We dropped our tagged bags, went through security and the check-in process and walked up the gang plank on Deck 5. Lunch was being served up on Deck 12. We walked. After lunch, while waiting for our cabins to be released to us, Alison and Marion made our non-Main Dining Room reservations – getting 5 nights instead of 4, and we stopped by the computer lab to be told to follow the WIFI signup instructions in our cabin. So, off to the cabins we went. It took a while to unpack, but we managed; followed by the safety drills.

We wandered up to Deck 12 for the Bon Vayage party, but found that the ship had already left the dock – those sneaky guys! No Louis Armstrong “It’s a Wonderful World”. We left at 5 and were told that it would take 4-1/2 hours to clear the archipelago and get out to sea. Wow! We were bobbing and weaving among the islands – very close to the islands. It was kind of neat. our first dinner was at 6:30 in the Toscana restaurant – very nice Italian dinner.

We finished dinner around 8:45 and returned to the cabins. Sleep wasn’t far off.